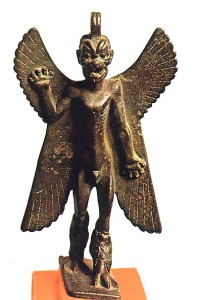 Pazuzu was a grotesque demonic deity of Assyria and Bablylonia in the first millennium BCE, commonly depicted in amulets, plaques and small figurines as having a canine face, body scales, a snake-headed penis, the talons of a bird or the claws of a lion and, usually, one or more pairs of wings.

(at right) Figurine of the demon Pazuzu, cast copper or bronze, Assyrian or Babylonian, 7th century BCE. Inscription on back of figure: “I am the god Pazuzu, son of the god Hanbi, king of the evil wind demons”. Height 146 mm. Musée du Louvre.

Although frequently regarded as a malevolent demon of the underworld, Pazuzu seems also to have played a beneficent role as a protector against pestilential winds (and particularly the south west wind). Moreover, Pazuzu’s association with Lamaštu led to his employment as a force against her evil, forcing her back into the Underworld. Amulets of the demon Pazuzu (or simply of his head and face) were therefore often situated in houses or hung about the necks of pregnant women.