[Spellings have been anglicised, some elements of Egyptian terminology have been altered slightly; otherwise, the translation represents James Allen’s published work].

(1) [The living one, Horus Powerful of Life-Force; Two Ladies Fresh of] Years; Gold Falcon Divine of [Appearan]ce; Young God, Lord of the [Two] Land[s, King of Upper and Lower Egypt MAATKARE; Son] of Re, [Lord of] Appearance [HATSHEPSUT UNITED WITH AMUN, given life like the Sun forever – (2) she whose titulary has been set and remains like the sky, setting up the annals of her diligence on the cliff of Her of the Mountain Top toward the (3) rising of the lord of [rays] over the desert edge, when his flames are on the back of the two deserts.

The favourite place(s) [of] all the gods have had their braziers spread and (4) their chapels broadened, each (god) at the sanctuary he has desired, his life-force content with his thrones, (5) for I have stipulated the fulfillment of their enjoyment, their colonnades having been [ … ]ed, the hidden place of the house’s interior having been made defensive for it with respect to “bringing away the foot”, (6) every (god) fashioned in his body of electrum of Upper Nubia, their festivals stable in (their) totality, (7) the register of festival-offerings (in effect) with respect to to its timing in adherence to the system of my making, the rites of its arrangement haveing been made firm, which (rites) he (the Sun) made in the past (8) for the first (gods).

My divine mind is looking out for posterity, the king’s heart has thought of eternal continuity, because of the utterance of him who parts the ished-tree, Amun, (9) lord of millions, and I have magnified the Order he has desired. For it is known to me that he lives on it: it is my bread, and it is of its dew that I drink. I was (10) in one body with him, and he has brought me up to make the awe of him powerful in this land. I am one who Atum-Khepri, who made what is- made (11) know(ledgable], one whom the Sun has fated as established for him.

The shores are united under my supervision, the Black Land and the Red Land under terror of me, (12) my impressiveness making foreign lands bow down. For the uraeus on my front pacifies for it all lands < … >. (13) Rashaut and Iuu cannot be concealed from my incarnation. Punt has [swollen] forth for me on <all its> field, (14) its trees bearing fresh myrrh. The roads that were blocked in both lanes are (now) trodden. (15) My troops, which were unequipped, have finery since my appearance as king.

The temple of the mistress of Qusae, which had <completely> (16) fallen into dissolution – the earth having swallowed its noble sanctuary, children dancing on its roof<s>, (17) no tutelary goddess causing fear, the lowly reckoning defencelessness in (her) absence, nor (18) her days of appearance having <be>en experienced – I hallowed it, built anew, fashioning its Leading Serpent of gold < … > (19) in order to defend its town in the processional bark.

Great Pakhet, who roams the wadis, resident in the eastern desert, [was] s[eeking] (20) the rainstorm’s paths, since there was no relevant libation-service that fetched water (for her). I have made her enclosure as [what this goddess] intende[d] (21) for her Ennead, the doorleaves of acacia inlaid with bronze, in [or]der that [they] might be [in it, her register of festival-offerings] (22) (in effect) with respect to (its) timing, the lay-priests learning of its time.

Hur and Hermopolis were im[poverish]ed of provisions. (23) I have hallowed the sacred precincts of their towns, established as a frequented place. Those who were in [ … ] the storehouse (24) are (now) requisitioner(s) from it.

Since great Thoth, who came from the Sun, has been reveal[ing (this) to] me, I [have consecrated to] him an altar in (25) silver and gold and chests of cloth, every vessel set in its (proper) place. For the one authorised to see, the leader of (26) Atum’s two Enneads, did not know how to do it, there being no knowledge in his house; the god’s-fathers were empty-headed, [and there was no son who] learned from <his> father. (27) My incarnation’s vision gives clarity of vision to those who shoulder the god. I have constructed his great temple of white stone of Tur[a], its gateways (28) of alabaster of Hatnub, the doorleaves of bronze of Asia, the reliefs on them in electrum, holy with (the image of) him of high plumes. I have [magni]fied (29) the incarnation of this god with a double festival of Nehebkau and the festival of Thoth, which I set for him anew (30) when they were (only) in the mouth and not on his calendar since the time when the conduct of the festival was single. I have multiplied the god’s offering for him more (31) than what was before, by my acting for the Ogdoad – for Khnum in his forms and for Heqet, Renenet, (32) and Meshkenet, united to build my body; Nehmetawy, Nehbetka, She of Whom it is Said (33) that the Sky and Earth are Hers, and He in the Mummy Wrappings – in Hebenu.

The relevant towns are in a festival of witnessing to me with (the words) “Unknown! Unknown!” The enclosure (34) walls are in foundation , for I have established them and made them festive, giving the houses to [their] owner(s). Every [god] says to himself: “One who will achieve eternal continuity has come, (35) whom Amun has caused to appear as king of eternity on Horus’ throne”.

So listen, all you elite and multitude of commoners: I have done this by the plan of my mind. (36) I do not sleep forgetting, (but) have made form what was ruined. For I have raised up what was dismembered beginning (37) from the time when the Asiatics were in the midst of the Delta, (in) Avaris, with vagrants in their midst, (38) toppling what had been made. They ruled without the Sun, and he did not act by god’s decree down to my (own) uraeus-incarnation. (Now) I am set (39) on the Sun’s thrones, having been foretold from ages of years as one born to take possession. I am come as Horus, the sole (40) uraeus spitting fire at my enemies. I have banished the gods’ abomination, the earth removing their footprints.

This is the system of the father (41) of [my] fathers, the Sun, who (now) comes at his dates. Damage will not happen (again), for Amun has decreed that my decree remain like the mountains. When the sun-disk shines, (42) it will spread rays over the titulary of my incarnation, and my falcon will be high on the top of the serekh for the course of eternity. 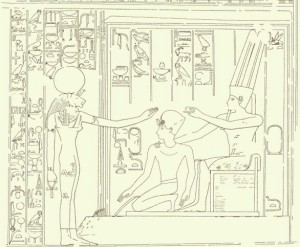 Fairman, H.W. and Grdseloff, B.