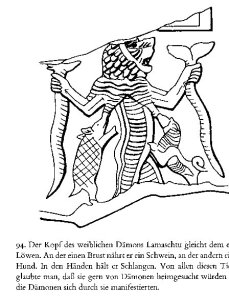 Lamaštu (also written Lamashtu) was an evil and malevolent demon goddess within the Mesopotamian pantheon – as the daughter of the god An and acting according to her own initiative, rather than at the gods’ instruction, she represented something more than the usual demonic power. The writing of her name in cuneiform further suggests that Lamaštu was considered a goddess in her own right.

Lamaštu practised evil apparently for its own sake, her primary victims considered to be unborn chlildren and new-born babies. Pregnant women were therefore also her targets, Lamaštu generally being held responsible for miscarriage and cot death amongst babies. It was believed, in the first instance, that the wearing by the expectant mother of an amuletic bronze head of the demon Pazuzu might thwart the goddess’ evil plans. Another apotropaic device in warding off Lamaštu was the positioning of the so-called ‘Lamaštu-plaques’ of metal or stone about the house, these including a depiction of Pazuzu forcing Lamaštu back into the Underworld from whence she came. Rather than a pregnant woman, however, these plaques depict a bed-ridden man, suggesting that Lamaštu was also associated with disease. Finally, the ritual offering of centipedes and brooches, amonst other items, were considered to distract Lamaštu from her intent.

In incantations Lamaštu is described as possessing the head of a lion, a donkey’s teeth, bare breasts and a hairy body, blood-stained hands with long fingers and nails, and the clawed, talon-like feet of the bird-demon Anzû (Imdugud). Iconographic depictions of Lamaštu in the 9th – 7th centuries BCE have her wearing upright ears, like those of a donkey, whilst a piglet and a whelp suckle at her breasts. She frequently stands or kneels on the figure of a donkey and holds snakes in both hands. Her particular beast was the donkey and her associated object a boat, in whichLamaštu was thought to navigate the river of the Underworld.

One thought on “Lamaštu (Lamashtu)”