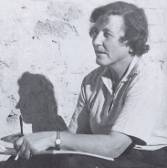 Born on the 5 January 1906, the eldest daughter of Sir Frederick Kenyon, the distinguished Biblical scholar and later Director of the British Museum.

Read history at Somerville College in the University of Oxford, England and later became the first woman president of the Oxford University Archaeological Society.

Kathleen Kenyon’s first field experience was to serve as a photographer for the expedition which conducted the pioneering excavations at Great Zimbabwe in 1929, led by another great female archaeologist, Gertrude Caton-Thompson. Returning to England, Kenyon joined the archaeological couple Mortimer and Tessa Wheeler on their excavation of the Romano-British settlement of Verulamium (St Albans), 20 miles north of London. Working there each summer between 1930 and 1935, Kenyon directed the excavation of the Roman theatre. In the years 1931 to 1934 Kenyon worked simultaneously at Samaria, then located in the British Mandated Territory of Palestine, with John and Grace Crowfoot. There she cut a stratigraphic trench across the summit of the mound and down the northern and southern slopes, exposing the Iron II to the Roman period stratigraphic sequence of the site. In addition to providing crucial dating material for the Iron Age stratigraphy of Palestine, she obtained key stratified data for the study of Eastern terra sigilata ware.

After the war, she excavated in Southwark, at the Wrekin, Shropshire and elsewhere in Britain, as well as at Sabratha, a Roman city in Libya. As a member of the Council of the British School of Archaeology in Jerusalem (BSAJ), Kenyon was involved in the efforts to reopen the School after the hiatus of the Second World War. In January 1951 she travelled to Transjordan and undertook excavations in the West Bank at Jericho (Tell es-Sultan) on behalf of the BSAJ. Her work at Jericho, from 1952 until 1958, made her world famous and established a lasting legacy in the archaeological methodology of the Levant. Ground-breaking discoveries concerning the Neolithic cultures of the Levant were made in this ancient settlement. In this period she also completed the publication of the excavations at Samaria. Samaria Sebaste III: The Objects, appeared in 1957. Having completed her excavations at Jericho in 1958, Kenyon excavated in Jerusalem from 1961 to 1967, concentrating on the ‘City of David’ to the immediate south of the Temple Mount.

Kenyon’s vast legacy in the field of excavation technique and ceramic methodology, not only in the Levant but also further afield, are absolutely without doubt. Larry G. Herr, one of the directors of the current Madaba Plains Project and an extremely competent ceramicist in his own right, attributes to her directly the first of the key events (after the advances made by William F. Albright at Tell Beit Mirsim in the 1920s) that brought about our modern understanding of pottery in the southern Levant: “The first event was the refinement of stratigraphic techniques that Kathleen Kenyon’s dig at Jericho catalyzed. The strict separation of earth layers, or archaeological sediments, also allowed the strict separation of ceramic assemblages” [2002:53]. Herr, moreover, sees her strong indirect influence in the second event that promoted advance within ceramic methodology – “…the importation of Kenyon’s digging techniques by Larry Toombs and Joe Callaway to Ernest Wright’s project at Balata. Here, they combined Wright’s interest in ceramic typology in the best Albright tradition with Kenyon’s methods of excavation, which allowed the isolation of clear, stratigraphically determined pottery assemblages” [2002:53].

Herr, however, also conveniently summarises the somewhat mixed nature of Kenyon’s legacy: for all the positive advances, there were also definite shortcomings. “Kenyon… did not capitilize fully on (the) implication of her stratigraphic techniques by producing final publications promptly. Indeed her method of digging, which most of us have subsequently adopted, causes a proliferation of loci that excavators often have difficulty keeping straight long enough to produce coherent published stratigraphic syntheses. Moreover, her insistence that excavation proceed in narrow trenches denies us, when we use the Jericho reports, the confidence that her loci, and the pottery assemblages that go with them, represent understandable human activity patterns over coherently connected living areas. The individual layers, insufficiently exposed horizontally, simply cannot be interpreted credibly in terms of function. This further makes publication difficult, both to produce and to use”[2002:53].

Another vitally important aspect of Kenyon’s career was her role as a teacher. From 1948 to 1962 she lectured in Levantine Archaeology at the Institute of Archaeology. Her teaching, complemented by her excavations at Jericho and Jerusalem, which formed her ‘field school’, helped to train a generation of archaeologists, who went on to teach in Britain, Australia, Canada, the United States, Denmark and elsewhere. Basil Hennessy, Emeritus Professor of Near Eastern Archaeology at the University of Sydney for example, was her assistant at Samaria and elsewhere, and has helped transmit her legacy to new generations of Australian archaeologists.

In 1962, Kenyon was appointed Principal of St. Hugh’s College, University of Oxford, and was thereafter deeply involved in both College and University affairs at Oxford.

The British School of Archaeology in Jerusalem, amalgamated within the Council for British Research in the Levant (CBRL) in 1998, was officially renamed the Kenyon Institute on 10 July 2003 in honour of Kathleen Kenyon.