Lamassu is an Neo-Assyrian / Akkadian term used to designate a composite creature, conceived of as a winged lion- or bull-figure with a human head. As protective deities or genii, larger than life-size statue-blocks of lamassi (pl.) were placed on either side of late Assyrian palace doorways and entrances in order to guard against the entry of evil and chaotic forces. As such, they are characteristic of this late phase in the development of Assyrian art (Neo- or Late Assyrian) when sculpture in the round was otherwise rare, compared to earlier periods. 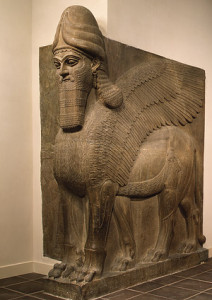 The hybrid or composite iconography is powerfully evocative of strength (body of lion / bull), speed (an eagle’s wings) and intelligence (human head). Each monolithic colussus was carved partly in relief and partly in the round from a single block of stone, measuring up to 5.50 m2 in size. Initially carved roughly in the quarry, each statue-block was transported to its final location (often by river), where it would be set in place and be subjected to fine carving.